A Trip to Remember

Grow Your Own Spring Grass 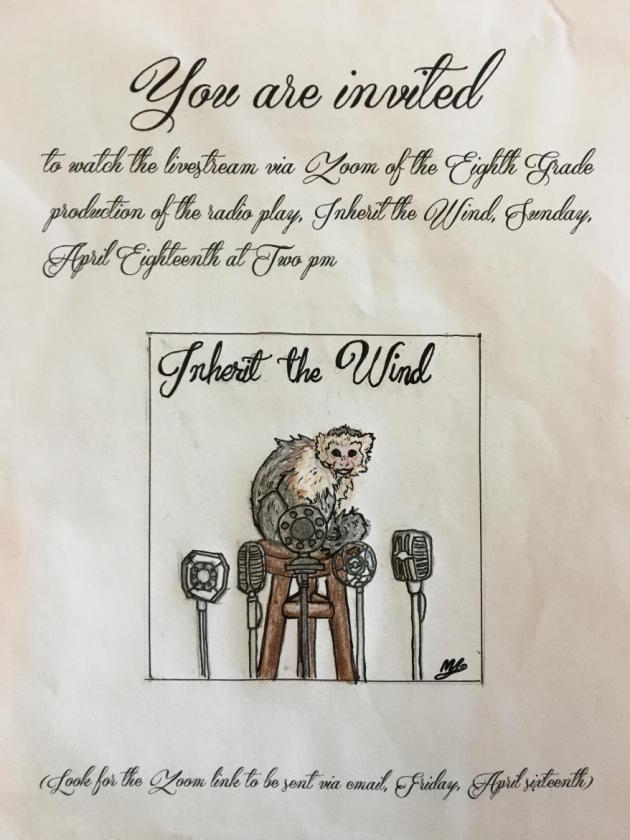 Each year the eighth grade performs a play in the spring prior to graduation. Due to the global pandemic, the class came up with a creative way to have a performance without an in-person audience.

With the help of another WSB alumni, Jessie Hughes and Elias Schutzman—now an actor, musician, teacher, and sound expert— Mr. Ciofalo's eighth grade class was able to host a live zoom performance of a radio play. The class set up one camera in the Eurythmy Room and several state-of-the-art microphones for the live performance on  April 18.

The actors used their voices and and their own sound effects to take the audience back to Tennessee during the hot summer of 1925 for the trial of the century when a high school teacher, John Scopes was on trial for teaching Charles Darwin’s Origin of the Species in a science class. The trial featured the then world-famous trial lawyer Clarence Darrow who volunteered to defend Scopes and really science against the Bible Belt’s savior and magnificent orator, William Jennings Bryan. The trial, dubbed “the Monkey Trial" was turned into a smash Broadway hit with fictional names and then many film versions were adapted from the play, which is called, INHERIT THE WIND.

Sit back, relax, and enjoy the audio playback of the performance on Vimeo.

Class plays teach life skills and invigorate subject lessons as an important part of Waldorf education. Find out how performance play a role in Waldorf education in Baltimore in a past blog post.