Green Dragon Bytes: The Importance of Getting Muddy 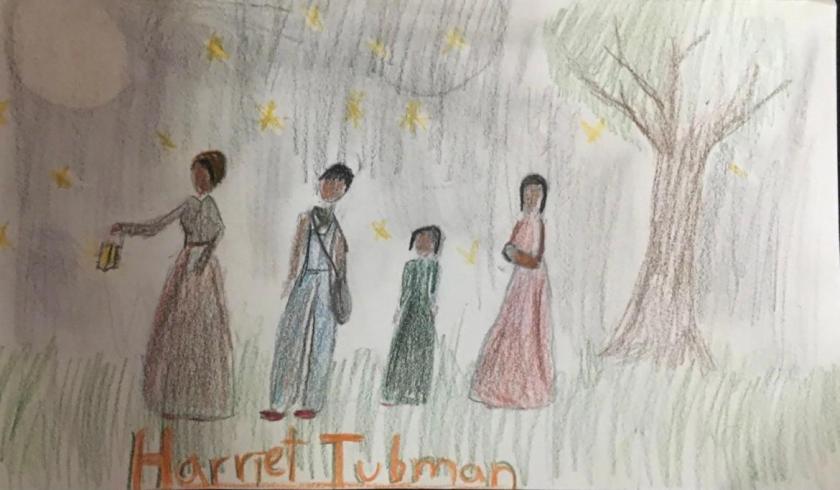 Our middle school students are celebrating historic figures, heroes and icons in many ways this year.

When the student council expressed to the middle school teachers that they'd like to hear more about prominent Black History biographies, the community was able to come together and create a meaningful experience. Each teacher researched interesting biographies to present to their respective classes and then each class had a student present a powerful essay to the entire middle school this week.

During the middle school meeting, held on Monday mornings, three students represented their own classes and talked to their peers about compelling highlights they were able to glean from the teacher presentations.

Emilia, in sixth grade, learned about Frederick Douglass and was able to teach others about his life. "Frederick Douglass did a lot for our country and for African Americans, from escaping and standing up against slavery, to spreading his story through books and speeches," she said.

Soren, in seventh grade, gave a presentation about Sojourner Truth and read an excerpt from Truth's "Ain't I A Woman" speech.

And after hearing several different biographies, the eighth grade chose to have Sonia present on Muhammad Ali. "Muhammad Ali was much more than just an incredible boxer, he was an activist, entertainer and philanthropist," she said during her speech.

In addition to the biography project, subject teachers are also exploring black history in each of their classes through art, poetry, music, and literature.

The students have been so inspired they decided to create a special edition of their newspaper focused on Black Lives Matter. Students submitted artwork, essays, thoughts and photos to illustrate the movement, their feelings and what they're learning about in their classes and at home.

Ms. Jones created a beautiful intro to Black History Month highlighting why it's important for all of us to celebrate black history this month and all year long.

"In 1926, sixty-one years after slavery had ended, an African American scholar named Carter G. Woodson created Negro History Week. He wanted to bring awareness of the accomplishments of African Americans, rather than focus on their history of oppression. In 1976 this week was expanded to Black History Month.

Many people ask: why set aside a month? Isn’t that a kind of segregation? Why isn’t Black history fully incorporated into American history all year?

The answer begins with the fact that history books don’t write themselves. Academic classes don’t create themselves. People create the books and the classes. And until recently, only white people, primarily men, had the power and the authority to publish and distribute textbooks for students around the country to use. In those books and courses, the history of Black people had been effectively erased.

The erasure began with slavery. When Africans arrived in the United States, they were forbidden to keep their names, their families, their religion and culture, their very language, and so their history was lost. Under slavery, many were forbidden by law to learn to read or write. After 400 years of slavery, another 100 years of segregation and unequal funding denied Black people equal education and opportunity.

If you are thinking all this is ancient history, please remember that your older teachers, including me, were alive when segregation and whites-only signs were still legal for stores, public bathrooms, and schools in the South. So here is one example of the kind of history that lingers when not corrected. I went to a large public school up north. That public school spent the money to send my entire grade, hundreds of students, to a movie theater to see a special showing of Gone with the Wind, because that movie, made some 40 years before, was considered to be such a great lesson in American history. In that movie, which is about the Civil War that ended slavery, all the main characters are white and heroic, and all the Black people are depicted as either childlike and comically simple or animal-like and brutal. According to the movie, still considered a classic today, the Black people had been better taken care of and happier under slavery. The point of my story is to tell you that the true history of Black people is still being researched and reclaimed. It takes time, focus, and special study for the new stories to be told, new books written, and new movies made.

The fact is, we will never understand this country, our country, without learning Black history. Imagine trying to study American music without ever learning about the Black contributions of Dixieland, ragtime, the blues, jazz, rock and roll, soul, Motown, funk, or hip-hop.  You can’t. Just one month ago rioters smashed into the Capitol Building, brandishing Confederate flags. How can you begin to grasp the enormity of that fact, if you know nothing about the Civil War and why it was fought? You can’t.

The study of Black history forces us to examine the wonderful promise the founders of our country made to preserve human freedom and dignity. By exposing the limitations of that promise, we should be all the more committed to upholding it more fully.

Lastly, Black history teaches us about the incredible resilience of human beings who have survived oppression, fought it, triumphed over it, and paved the way for others to succeed. It is ultimately a celebration of the human spirit."