A Peek into a Day in Forest K 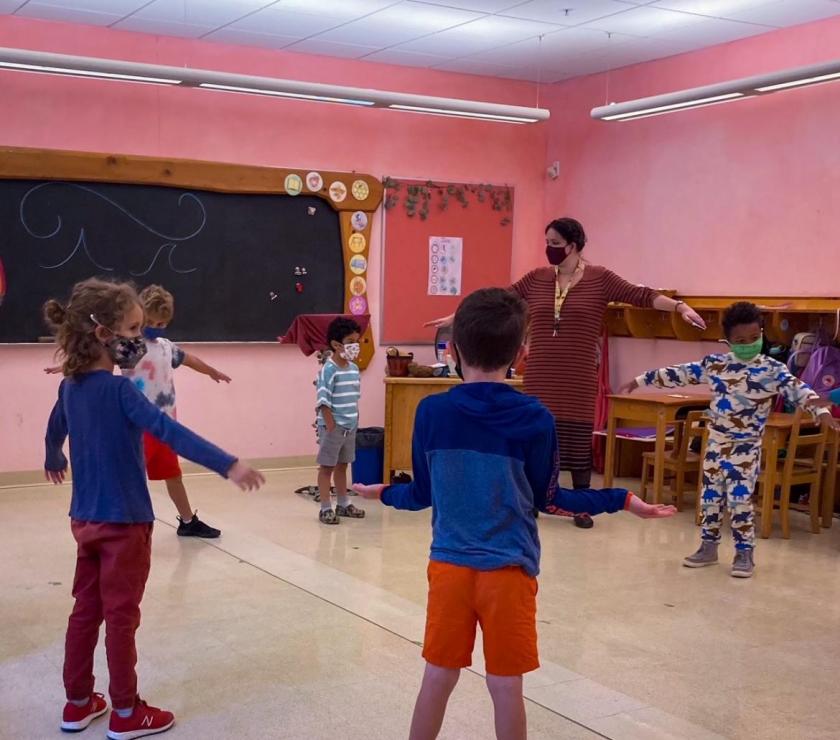 Form drawing, or Dynamic Drawing, as it was originally termed by Waldorf Education’s founder, Rudolf Steiner, is an interesting and integral part of the Waldorf Curriculum. Starting with the simplest of forms in first grade as a type of pre-writing exercise, WSB students advance to complicated geometric drawings by their middle school years. A recent visit to Ms. Angelie Guilbaud’ s first grade main lesson block finds us at the very beginning of that exciting trajectory with an exploration of straight and curved lines.

The morning lesson begins with the recounting of a familiar story, in which a pair of travelers find themselves needing to cross a lake rife with bumpy waters. As the class remembers the rough surf of the story told the day prior, Ms. Guilbaud deftly draws on the blackboard what appear to be the very same waves from the story, and which are in fact, today’s two forms.

With these chalk-blue waves now occupying a position of prominence within the room, the class is invited to share their own experience of waves. Practicing newly honed hand-raising skills, little arms shoot up offering answers: “I don’t like waves when I am in boats”; “I was knocked down by an Ocean wave once”. “I jump in waves with my Dad!”. Though fun, this is not just idle chatter, but the budding of a personal connection between students, story and form.

Next up, desks shuffled, students walk the shape of the cresting wave through the classroom. In walking the smooth and curved lines of the wave with their whole body, you see how the term dynamic drawing may indeed better capture the essence of the lesson at hand - it is the movement that is central to the skill which, only later, will be captured on paper.

But first, it’s time for more practice. Sand trays are brought out and the exercise is turned over to the hands. These trays are powerful tools – and decidedly playful. The children are soon eagerly making waves in the sand, deeply engaged with their many senses.

After a bit of clean up, it’s time to draw at last. Only now, now that the feeling of the movement of the form is fully alive within the child do they draw it. The paper, carefully prepared with a green border, is ready to receive their work and the children are ready to give it. They have been filled with waves, wiggles, and wonder.

Form drawing is one more beautiful example of Waldorf education’s reliance on art to educate and inspire.

Would you like to learn more about the Waldorf School of Baltimore and it’s head, heart and hands focused curriculum? Email our admission director Ilene Wise, today.