A Gift From Every Season

The Four Candles: A Story of Hope

Guest Post: How to Be An Invasive Plant Hunter

Guest Post: How to Be An Invasive Plant Hunter 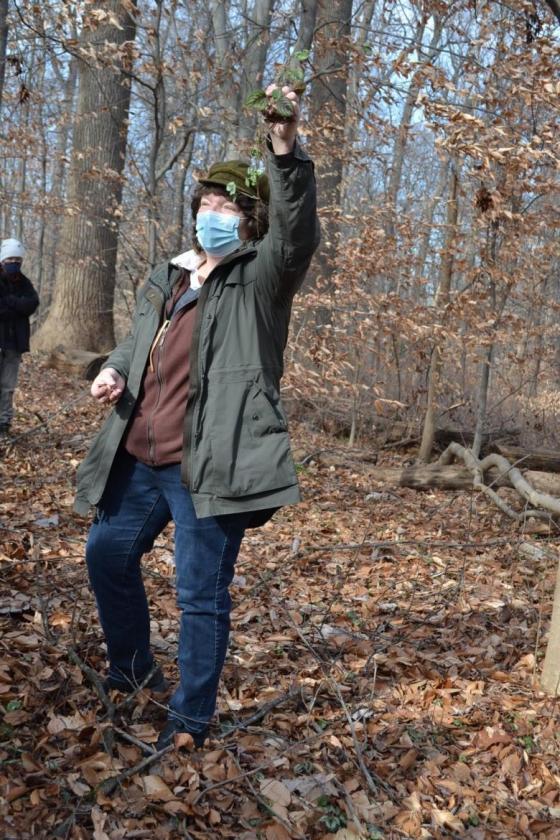 For more than a century, Waldorf education has maintained a strong focus on immersing children in the outdoors to promote a love of nature. Led by dedicated class teachers, the Waldorf School of Baltimore has transformed this core belief into a formal, concerted effort to prepare our students to become empowered, responsible environmental stewards. Part of that important work is keeping our wonderful Waldorf Woods healthy by clearing away invasive and non-native plants and vines.

On today's guest blog post, our friends at the Clyburn Arboretum were kind enough to share their top tricks for identifying and removing their top three troublemakers.


How to be an Invasive Plant Hunter


On Wednesday, January 19, Cylburn Arboretum Friends hosted Dr. Sara A. Tangren for a “Wednesday Walk” on invasive plants. This was the first of CAF’s Wednesday Walk series that will take place on the third Wednesday of every month. Dr. Tangren is an expert in the areas of invasive plants, native plants, native meadows, and soil science. She has worked for the University of Maryland extension and currently works for the Government of the District of Columbia in the National Capital Region PRISM program (Partnership for Regional Invasive Species Management).

Dr. Tangren discussed why we often fail in the battle against invasive plants. The simple answer: we don’t start soon enough! By waiting until there is a major problem with an invasive species, we lose our chance to win the battle! The principal of “Early Detection” focuses on invasive plants that we still have a chance to control because their spread isn’t already out of hand. For example, at Cylburn we might consider locating, documenting, and removing Italian Arum (of which there are a few plants scattered around Cylburn) rather than attempting to extirpate English ivy, which is now everywhere at the arboretum. Sara showed us several examples of Early Detection invasive plants that we can look out for in our neighborhoods and parks. She promotes the use of the iNaturalist app to identify and document these when we find them (and encourages us to use iNaturalist in general as a really fun way to learn what you are looking at and share data with others! https://www.inaturalist.org)

Winter is a great time to spot several of these “alien” plants-so many of them are evergreen! Three that we found at Cylburn might also be lurking in your yard:

1. Italian Arum Arum italicum This is a pretty evergreen that is typically variegated with light-colored veins (this specimen is solid-colored). The leaf is arrowhead-shaped and the plant produces a smelly flower in spring. It is very difficult to get rid of Italian Arum! It spreads rapidly by underground tubers and all parts of the plant are poisonous.

2. Yellow Archangel Lamiastrum galeobdolon This groundcover plant is inching its way through the Cylburn woodland. It is in the mint family, which all you gardeners know is difficult to contain! It can be identified by its yellow flowers in spring and pretty silver and green evergreen leaves. Because it’s in the mint family it also has a square stem which helps to identify it (try rolling the stem between two fingers). This is a true groundcover that will leave no room for other plants once it takes over. To remove it, make sure you get the whole plant-roots included and dispose of it as trash!

3. Trifoliate Orange Poncirus trifoliata This small, thorn-laden tree is planted intentionally at the arboretum but has invaded our woodland. Unfortunately, once it spreads, it aggressively out-competes native vegetation and isn’t exactly inviting to wildlife! It’s small orange-like fruits are beautiful (and edible-though sour!). However, it’s fruit is how the plant spreads so well. One way to stop the spread of trifoliate orange is to bag up fruit in plastic bags for landfill waste.

Thank you to Friends of Cylburn's Director of Education, Erika Castillo for this informative and important post!


Would you like to learn more about the Waldorf School of Baltimore and our commitment to Nature Studies? Please email Ilene Wise, admissions@twsb.org and get to know an education as unique as your child.